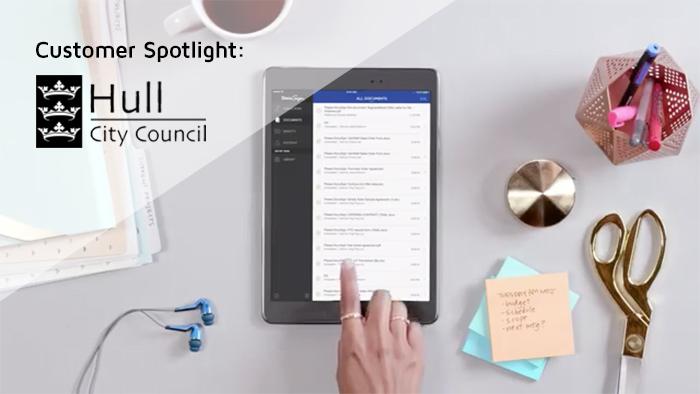 The “Customer Spotlight” series shines a light on DocuSign customers who are benefiting from digitising their business processes with electronic signatures.

Next up is Ian Anderson, who described why Hull City Council deployed DocuSign within its commercial arm, beginning in legal and procurement.

Q: To start, can you provide an overview of Hull City Council and your role within the organisation?

Hull City Council is the governing body for the unitary authority and city of Kingston upon Hull. It has a population of around 280,000 and sits as a major port on the east coast of Yorkshire. It has all the functions that fall within local government.

My role within it is town clerk. I have the functions of the legal and procurement services and, now, the ICT service, together with committee services, elections, and information governance.

Q: What was Hull City Council’s process for getting documents signed prior to electronic signatures?

Until now, we’ve been posting the physical contracts out to be signed and then storing the signed contract in a deed room. However, we use a paperless case management system for our day to date operations. This meant that we were having to step outside of a paperless environment when the final contract, or final deed relating to a property transaction, was produced for signature.

Q: What business challenge were you trying to resolve when you began looking at eSignatures?

Dispatching large quantities of documents via DX or post is inevitably going to be expensive. We’d have to print plans and drawings, for example. Often, people would send CDs back and forth to avoid the cost of dispatching huge amounts of paperwork.

It was unfortunate that we would finalise the correspondence, up until a point where we’d concluded the deal, and then use paper. Worst case, you could end up with correspondence going back and forward; chasing documents; asking for them to be returned. In time and effort, copying and postage, the cost would be substantial. It’s difficult to attach a figure, but I wouldn’t be surprised if it cost £100 per transaction.

Q: Is DocuSign part of Hull City Council’s overarching digital strategy or is it a standalone initiative?

As a legal service, we wanted to move to electronic management of files in totality. Four years ago, we purchased a case management system that enabled our communications, emails and written form to be integrated into a single electronic file, with a view to being paperless. Electronic signatures are of relevance to the procurement and legal services, primarily, but they have relevance to all areas of operation.

Within procurement, we also moved into electronic tendering of contracts. So the entire process, in the same manner, was electronic until the point of formulating the contract. It was important that the contract could also be placed on procurement’s services files in electronic form.

Q: Are legal and procurement the main departments using electronic signatures or has it expanded beyond these functions?

We started off small and it will be gradually being spread out across the organisation. Now, we use electronic signatures for all commercial contracts that we hold.

The beauty of the DocuSign arrangement is the originator of the document controls who can edit the document. The speed of the transaction is also facilitated much quicker because it’s a simple matter of opening a document and signing. It allows us to avoid the postage costs of the documents, the risk of someone trying to edit them, and ensures we end up with an audit trail of a completed transaction with, for example, a construction company.

Q: What aspects of DocuSign influenced your decision to go with us?

Security was essential. The fact that the solution was compliant with European standards was important to us in our consideration.

The audit trail was fundamental as well. To be able to confirm that the documents have been signed in a manner that provides assurance is crucial. Before, people would often neglect that element in lower value contracts. There was a danger that they wouldn’t get signed and that the other party would submit different terms and conditions for doing business. So, assuring ourselves that we have a finalised audit trail that secures those conditions is a big advance on the previous arrangements.

Q: What do you value most about using DocuSign?

Aside from the audit trail, it’s just very simple to use. From a signing perspective, you just push a button to attach your signature. For the individuals that are sending documents, I sat in one of the workshops that were arranged to get DocuSign in place, and it was easy for them to use as well.

The forwarding function is also useful. There’s always a danger that during a tender process the people involved change. So, we need the suppliers to have the ability to forward the document on for signature by a new company director, which DocuSign allows. It seemed like DocuSign had thought through the problems that would arise and had answers to them.

As all the contracts move on to this methodology, we’re going to find an alleviation of both the time involved in getting the contracts back, which was half the problem, and also having to store and retrieve them. They’ll go on to the electronic file that we hold for each case and there you’ll find the audited contract. That should make a big improvement. It’s going to be much quicker.

Q: Have you had any feedback from your stakeholders about the technology?

People are moving over to DocuSign and accepting it. They feel very positive towards it. Those that are using it certainly see the benefits. They’re comfortable with it and have found it easy to use.

We’re now downloading an audit trail of the signing processes together with the contract, and placing that on the electronic file. So, we no longer bother dispatching the paperwork and indeed storing the paperwork when it’s returned.

Q: Can you share any advice with our readers who are looking to implement electronic signatures?

The main thing is to agree a process internally as to how you’re going to use the solution. Seek to gradually implement it on a piloted basis, but also think about the wider potential of it.

Look at the opportunities for greater efficiency by working with your partners before you implement it. And use the DocuSign tutorials to inform you on how you’re going to do that.