Live from Momentum: Highlights from the closing keynote 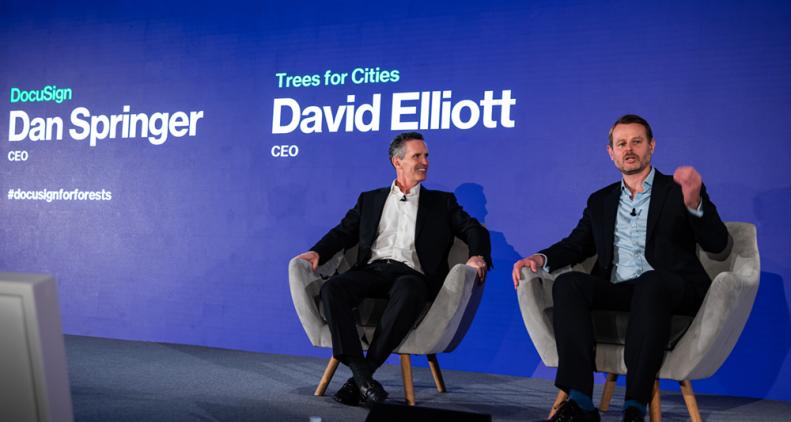 “We want to bring green back into the city. It makes all of our lives better.”

This was one of the memorable comments made by David Elliott, CEO of the charity Trees for Cities, in his inspiring fireside chat with DocuSign CEO Dan Springer that closed the formal part of Momentum London 2019.

As a company trying to digitise inefficient and paper-driven systems of agreements, DocuSign is a naturally forest-friendly firm. But it has gone further with DocuSign for Forests, part of a global commitment that Springer announced at the World Economic Forum, Davos, earlier in 2019.

Trees for Cities is a partner in DocuSign’s global initiative and Elliott said: “We’re excited about partnering with such an amazing organisation that is aligned with what we do.”

The 25-year-old charity has planted more than a million trees. It works across the UK, from the centre of London to the fringes of small towns, cooperating with local communities as well as business partners.

Driven by the Customer Success Management Team, some 35 DocuSign staff spent a sunny autumn day a few weeks ago maintaining saplings near Hanwell, out towards London’s Heathrow Airport. 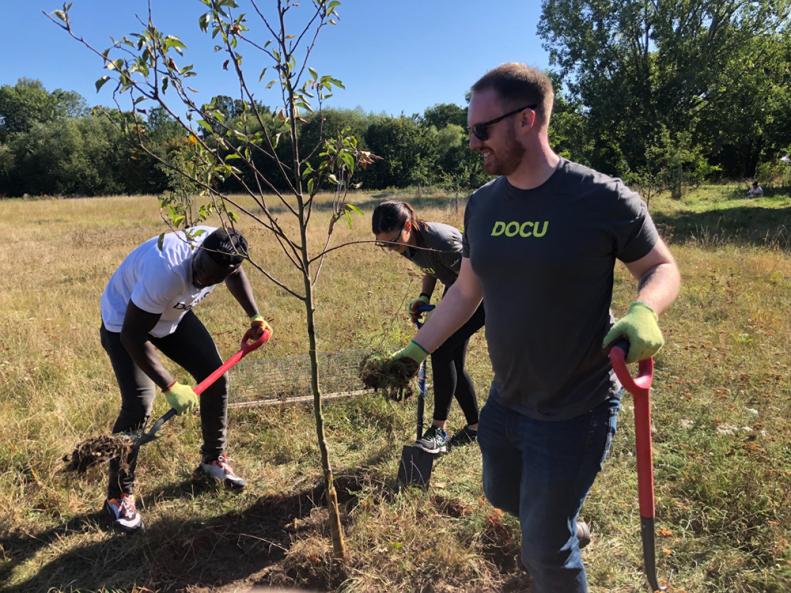 Elliott says the charity increasingly uses data and advanced mapping to identify which areas will get the most benefit from trees.

“We try and bring green into those parts not only to improve the aesthetics, the beauty of the city, but for a whole range of benefits the trees bring.

One study has suggested air quality contributes to around 10,000 premature deaths in London.

“Trees and green spaces can make a real contribution to that,” Elliott said.

CEO Springer grilled Elliott about the economics of tree planting. A small sapling can cost as little as £9 to buy and plant - yet in a hundred years some studies have shown a tree can have an asset value of hundreds of thousands of pounds after accounting such benefits as the carbon it locks away, Elliott said.

In the year to date, DocuSign’s customers in the region have saved around 2,300 trees (and much, much more…) by moving paper processes to digital - so this donation will in effect double that contribution to the planet by allowing Trees for Cities to plant about 2,300 trees.

Want to help? The UK DocuSign for Forests page not only has data about how many trees have been saved by customers’ use of digital agreements, but it also has details of Trees for Cities and a donation link.

Everything you need to know about electronic witnessing of agreements

DocuSign eWitness allows you to sign and witness an agreement in a simple way - here we give you an overview of what it is and answer your questions around it.

Your guide to DocuSign eSignature for Salesforce

Using DocuSign eSignature for Salesforce enables you to accelerate the process of signing documents. Here's everything you need to know.