The History of Innovation in 50 Agreements: The Disruptors and Game Changers 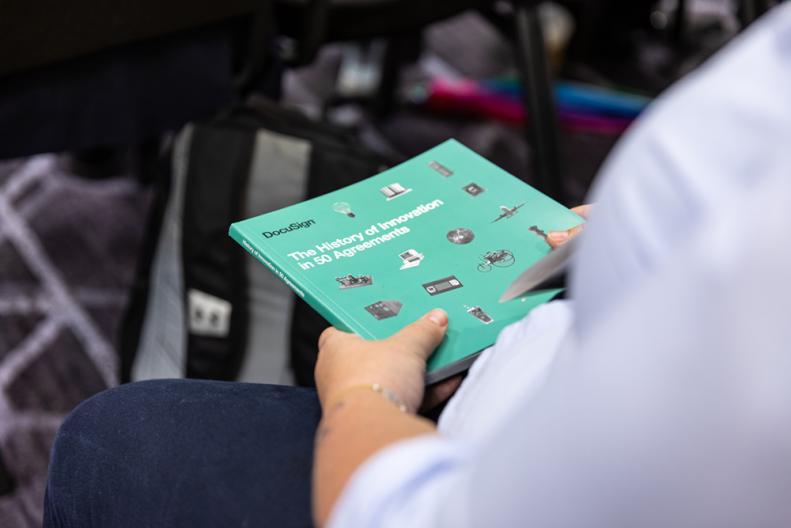 A look back, to look forwards.

Despite the best efforts of highly compensated consultants, business schools and the thought leadership industry, the process of innovation is still, by-and-large, opaque. There is a school of thought that focuses on lone individuals – the mathematician with office walls covered in complex equations, the entrepreneur who grasps an unforeseen serendipitous insight, the computer scientist writing code into the night in their parents’ basement – these mavericks are positioned as solitary figures who determine change through sheer willpower and perseverance.

The reality is, of course, different.

History of innovation in business

The tech industry justifiably celebrates Steve Jobs for bringing the iPhone to market. But this ground-breaking product only became possible because agreements reached through the ages involved a broad array of companies and organisations, including Finnish Cable Networks, IBM, Motorola, CERN, Hewlett-Packard, Marconi, ARPANET, Microsoft, Samsung and Deutsche Telekom and multiple technological domains from Wi-Fi to touchscreens and computing to the LCD display.

Disrupting industries by entering into business with others

The fact that each of these organisations agreed to enter into business with others didn’t only further their own interests, it helped to ensure that innovation was shared more widely. This led to the development of products and services that in turn benefitted other organisations. For instance, the iPhone led to the App Store which has enabled the growth of the app development market, which estimates suggest will be worth around $80 billion in 2020.

Entire industries have been disrupted by this kind of approach. Think about an application like Uber. The ridesharing company doesn’t own any assets, it’s simply a technology platform that, through agreements, aggregates demand for transportation, providing a service that has impacted cities throughout the world.

Similarly, the social network Instagram is a business with $9 billion in advertising revenue in 2018 that is entirely driven by mobile devices. Waze is a navigation startup with 110 million monthly users that has achieved market dominance through having users agree to share their data, and aggregating this information to produce a real-time representation of traffic.

Waze’s innovation is that it disrupted the mapping market by creating a product that didn’t employ hugely expensive sensors in roads to detect the number of vehicles, but by showing users that, by entering into an agreement with the company to provide location data, they will have access to a service that is superior to others.

Scaling products to build out a user base quickly

One of the great advantages software companies have is that scaling their products has a marginal cost of close to zero. By comparison, there is a fixed cost to manufacturing more physical products – make more cars and you have the costs of the raw materials, components, factories and employees.

But scaling software – whether that’s enterprise accounting software or a technology platform that leverages data – has almost zero economic barrier. Which is why software companies’ business models largely depend on building out a user base as quickly and broadly as possible. A great example of this is Microsoft.

The most disruptive agreement of the modern age

But the most disruptive agreement of the modern age was one that underpins the collaborative nature of innovation. It occurred in 1991 between the computer scientist Tim Berners-Lee and CERN, the Swiss academic institution where he had developed the fundamental technologies that gave birth to the internet: HTML, URL and HTTP. Believing that the web should remain free and open and not be controlled by powerful corporations, the scientist and CERN relinquished all IP rights to code, meaning that anyone could use it.

Arguably, this agreement is the foundation of the modern age. Each of the disruptive companies of the digital era could only have existed because CERN and Berners-Lee put the web in the public domain. As Berners-Lee has said since that decision was made, “This is for everyone.” His vision of the internet as accessible to all was rooted in both a sense of egalitarianism, but also the knowledge that unrestricted access would be the best way to drive innovation and progress – a perspective that has come under threat as the growth of vast, dominant technology companies has concentrated influence in a limited number of hands.

We are entering a new age of autonomy – or automation – that will require that organisations ask different questions of consumers.

The future of agreements

Autonomous vehicle technology today is deployable in favourable circumstances and conditions – the grid layout of a sunny city in Arizona, say, rather than a wet winter night of a European city, the streets of which were designed in the Middle Ages. However, the regulatory and legal frameworks are vastly complex and fragmented; an insurer might feel comfortable underwriting an autonomous vehicle in a small, modern Arizona town, but not one that would be navigating the streets of Le Marais in Paris.

Developing regulation that is embraced across multiple territories and domains will be necessary for autonomous vehicles to be widely adopted by consumers – agreeing to trust will be the single biggest factor in the deployment of a technology that is likely to transform urban mobility in the coming years.

How agreements will be conducted

Equally, the way that agreements are reached will change. Increasingly, agreements will be conducted using distributed ledger technology, also known as the blockchain. On the blockchain, agreements are transparent and not centrally held and are known as smart contracts or self-executing contracts. As the ledger can only be changed when there is consensus across the network it means that there is less need for middlemen – banks, lawyers, payment processors – as there is no requirement for centralised third parties to authenticate and verify transfers of value. The idea is that an immutable ledger can decrease incidences of fraud while efficiency can be improved through smart contracts that automate a transaction between parties with very different incentives.

Let’s take it one step further. Today, the average car has more sensors embedded in it than a sophisticated military fighter plane. This so-called internet of things technology could be combined with the Blockchain in the case of identity and payments. A group called the Mobility Open Blockchain Initiative, which has members from thirty major automotive companies, including Ford, General Motors, Renault and BMW, is investigating a Blockchain-based identity system for all new vehicles meaning data such as their ownership, mileage and insurance details are immutably stored on the blockchain.

This cryptographically protected data could then be used autonomously for administrative purposes and private services such as charging, tolls or parking.

What else does the future hold?

As technology trends accelerate, it’s hard to predict exactly how the agreements of the future will be made. But, it seems likely that there will be two key trends that will hold sway: a push for more openness, combined with increased amounts of automation. One thing is for sure though, the key determinant of innovation will come down to human creativity and our willingness to embrace change.

*Print copies of the book were available to attendees of the launch and have been produced using paper from environmentally responsible sources.

Get inspired and read more about the agreements that sparked innovation, over on our hub page.